Dates to which events are rescheduled will be published additionally

Kharkiv Aero Club named by V.S.Grizodubova APO OPD Ukraine once again acts as the organizer and host of major sporting events uniting aviators throughout Europe and many countries of the world. International skydiving big way camps become an annual practice for Ukraine. Aerodrome Korotych serves not only as a platform for new achievements of the most experienced skydivers in the world, but also allows the crews of aviation units of various national departments to train. . 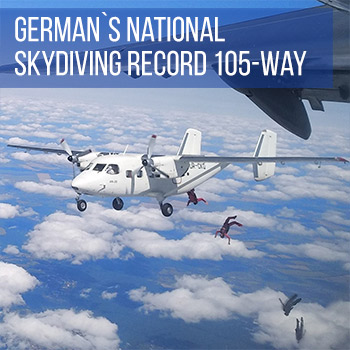 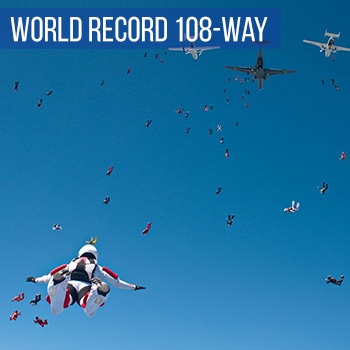 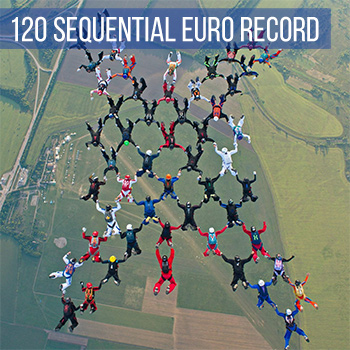 The National Guard of Ukraine, the Air Force of the Armed Forces, the Federation of Parachuting of Ukraine and the Kharkiv Aero Club named by V.S.Grizodubova APO OPD Ukraine in 2016 - 2019 got a joint experience of fruitful cooperation in training flight personnel, the development of skydiving in Ukraine, as well as enhancing the tourist attractiveness of Ukraine and the prestige of the country as a whole through international skydiving big way camps. The use of An-72, An-26, An-28, L-410 aircraft for landing skydivers performing sports jumps in the "Big Formations" category attracts numerous representatives of the aviation world to Ukraine.

The captains of the parachute world records decided to hold regular training camps and attempts to establish a 120-way European record in Kharkiv. Also, Polish skydivers will try to set their national record at the Korotych drop zone.

For the fourth year in a row, training camps for skydivers from around the world will be held at the Korotych aerodrome for jumping in the “Big formations with redevelopment” category with the participation of three An-28 aircraft. Attempts will be made to collect and several times rebuild complex big formations consisting of 60 participants in preparation for new world records.

During intensive training, skydivers will learn the technique of building and rebuilding safe big formations with world-class trainers, including Jan Milko Hotkinson, Leslie Gale, Ilya Balashov, Dieter Kirsch and others.

This international Big Way Camp could be a good stepping stone for other events, such as the European 120-way record, also planned in Kharkiv in late July.

The 120-way Polish national parachuting record is an unprecedented event for Ukraine to be held in Kharkiv in the summer. In order to strengthen friendly relations between the Polish and Ukrainian peoples, a decision was made to attempt to establish Poland's national parachuting record in the "Big Formations" class at the aerodrome Korotych of the Kharkiv Aero Club. Jumps will be performed from Ukrainian An-28, An-72 aircraft.

For the fourth year in a row, at the Korotych aerodrome of the Kharkiv Aero Club, international parachuting elite gatherings take place, which will be marked by new achievements. In the 20th year, the best world captains: Patrick Passe (France), Jan Milko Hodkinson (Great Britain), Kate Cooper-Jensen (Denmark), Paul Grisonsi (Poland), Ilya Balashov (Ukraine) collect the most trained and worthy skydivers from around the world to complete the attempts to set a world / Europe record “120way SEQUENTIAL EURO RECORD - 2020”. Group jumps in the “Big Formations” class will be performed from high-class Ukrainian aircraft An-28, An-72.

In the summer of 2019, 100 people gathered for the first time in the sky of Ukraine. Further 120 skydivers will build and rebuild complex big formations in free fall under the supervision of international-class judges to set a new European record.

Skydivers who wish to take part in international events and attempt to establish a European record must have a FAI sports license. In order to obtain a license for Ukranian skydivers, you must be a member of the Ukrainian national parachuting team, have more than 500 jumps and a category “C” in parachuting, and observe the rules of the Ukrainian Parachuting Federation. The fulfillment of these conditions gives grounds for inviting parachutists by the organizers to the teams of international events. 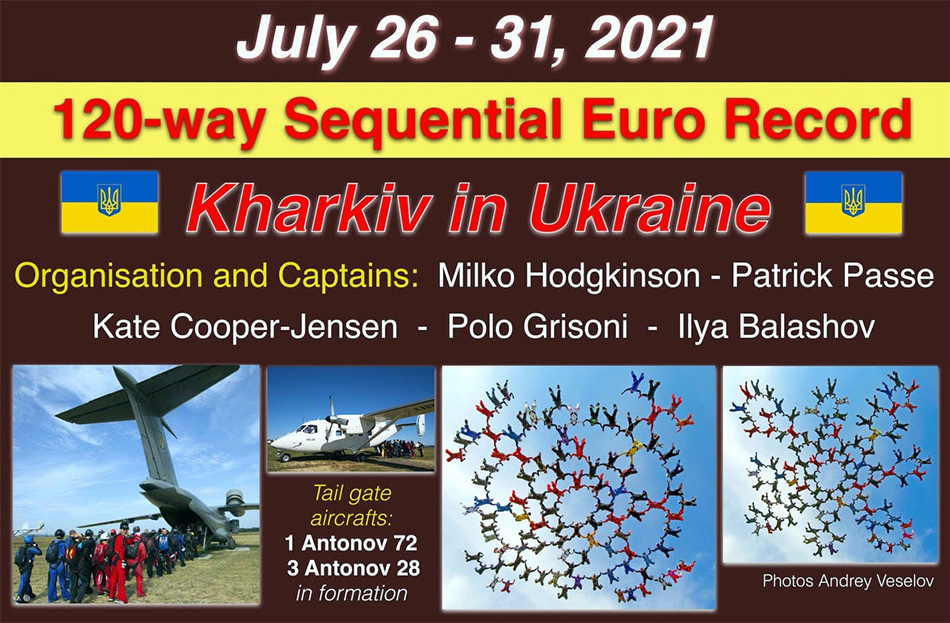 Regulation on the issuance of a sports license FAI.

National Parachute Record in the “Big Formations with Rebuild” class 50-way - “Back to the Future”.

On August 21, 2016, a team of Ukrainian skydivers set a national record dedicated to the 25th anniversary of Ukraine’s independence. In freefall, skydivers assembled and rebuilt the 50-way formation. It was then - for the first time in the history of Ukraine - the short take-off and landing aircraft, the An-72 military transport of the National Guard of Ukraine, landed on a unpaved airfield. The testing ground was the aerodrome of the Kharkiv Aero Club.

Aviation crews of the National Guard of Ukraine at the Korotych aerodrome successfully completed take-off and landing exercises at a short-run unpaved airfield and skydivers landing.

From August 21 to August 27, 2017, at the Korotych aerodrome, the first international gatherings of skydivers in the "Big Formations" class took place. 27 countries of the world, from Japan and Singapore to Brazil, but mainly - European countries - were represented by 70 parachutists in the European Big Way Camp. 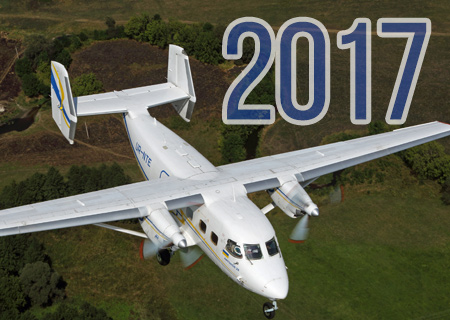 Thanks to the Ukrainian skydivers who became world champions, the captains of world parachute records consider the Ukrainian space for great sporting achievements. With the support of the National Guard of Ukraine in Kharkiv, preparations were made for a new world record.

The National Guard aviation crews again had the opportunity to undergo training, systematically increasing the professional level of the department.

In 2018, the Kharkiv Aero Club has already hosted 4 international skydiving events in a row, including 4 women's world records in the “Big Formations with Rebuild” class. In total, athletes from more than fifty countries of the world took part in all the gatherings of the season. For landing skydivers worked aircraft An-28, L-410 and An-26 of the Armed Forces. 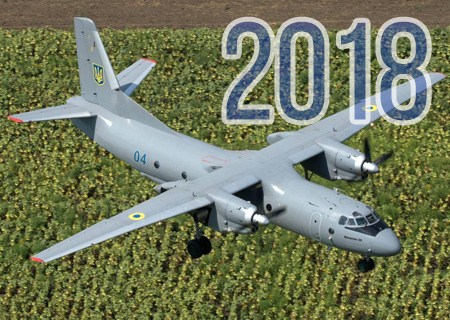 European and world record in Kharkiv «Women on Wings» (WOW)

On August 1, 57 skydivers gathered and rebuilt a big formation twice, on August 2, three groups of 60 skydivers with different composition of participants rebuilt a given formation twice and showed three figures. All these jumps are recorded as record-breaking by the international college of judges.

At the same time, an international gathering of male paratroopers was held at the Korotych aerodrome, who, with their jumps, spoke in support of female skydivers.

From August 4 to 8, 2018, representatives of 42 countries took part in the Sequential Games project at the Korotych aerodrome.

From August 20 to 23, 2018, the international BigWayCamp was held at the Korotych aerodrome, with the participation of 40 skydivers from 10 countries, including the USA, Denmark, Hungary, Poland, Germany, Singapore.

In the summer of 2019, cooperation continued. An An-72 military transport aircraft of the National Guard arrived in Kharkiv three times to participate in international aviation projects and continue training crews. In total, about 300 aviators took part in these events, representatives of almost 50 countries, including France, Germany, Great Britain, Japan, USA, Poland, Denmark, Czech Republic, Australia, Romania, Sweden, Slovakia and many others. 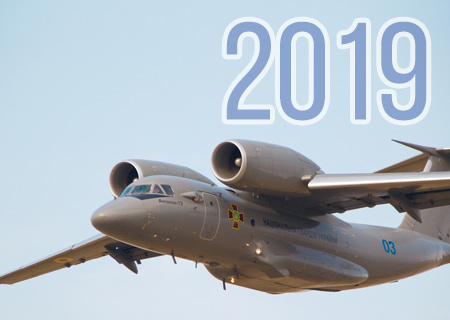 From July 29 to August 2, 2019, 10 training flights of the 3rd Aviation Squadron of the National Guard of Ukraine were carried out on the An-72 aircraft at the Korotych aerodrome of the Kharkiv Aero Club. The crews also took part in the skydivers landing as part of the international project to collect big formations in free fall in preparation for the Sequential Games world record.

During international training camps, the flight personnel of NSU aviation, under the guidance of experienced test pilots and test navigators, Antonov SE performed training on several types of training: takeoffs and landings from unpaved airfields of limited sizes, skydivers landing.

The international training session of the Sequential Games Kharkiv100-way Challenge to prepare for the world record brought together skydivers from 34 countries, among which, mainly, countries of Europe, as well as Great Britain, the USA and others.

The first 100-way in Ukrainian sky

From August 19 to 23, 2019, the first 100-way in Ukrainian sky was held at the Korotych aerodrome of the Kharkiv Aero Club with the participation of the An-72 National Guard aircraft. During training jumps of skydivers from different parts of the world for the first time in Ukraine, the 100-way formation was assembled in the sky above Kharkiv and rebuilt.

All foreign guests who visited Ukraine during the events organized at the Korotych aerodrome speak with great enthusiasm about our country and hospitality. The global parachuting community, the Parachuting Federation of Ukraine, Kharkiv Aero Club named by V.S.Grizodubova APO OPD Ukraine expresses great gratitude for the support and organizational assistance to the leadership of the command of the National Guard of Ukraine, the command of the Air Force of the Armed Forces, the leadership and test pilots of Antonov!